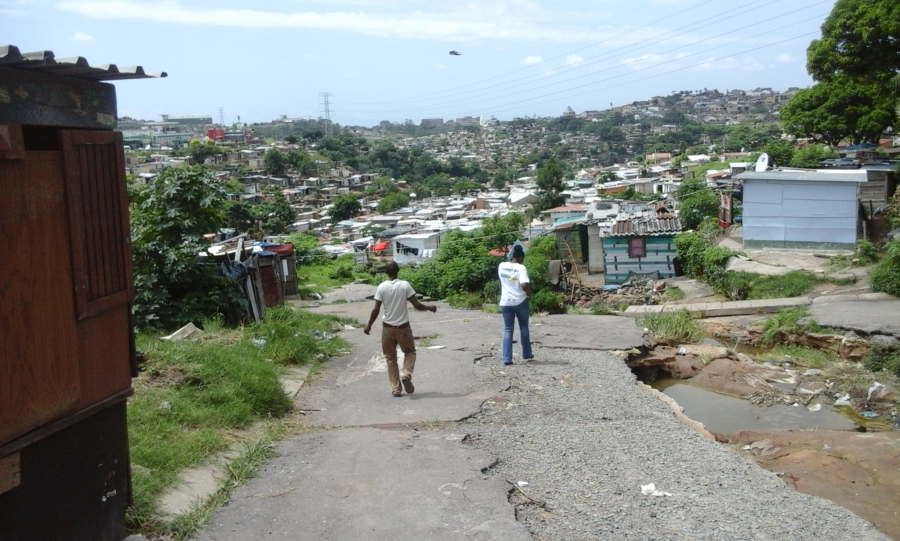 Stepping Stones and Creating Futures: Supporting women and men to create a world free from violence

Since 2012 Project Empower have been running an intervention called Stepping Stones and Creating Futures in informal settlements in eThekwini, South Africa. Now, supported by the What Works to Prevent Violence Against Women and Girls Global Programme funded with UKAID, they have a chance to evaluate this promising intervention.

South Africa is probably the most unequal society in the world, as assessed by the Gini Co-efficient, a tool for measuring the income difference between the richest and poorest in a country (Bhorat, 2015). These inequalities are clearly seen in the growing number of urban informal settlements throughout the country. As people – especially young people – move to cities in search of a better life, the lack of formal housing leads to many living in informal settlements.

As informal settlements are often built near cities with job opportunities, access to health services and education, for some they can and do provide huge opportunities. But at the same time, they are spaces with huge challenges. The Human Sciences Research Council (HSRC) estimates that HIV-prevalence in these informal settlements is roughly twice that of formal settlements (Shisana et al., 2014). And more widely, it is clear that these spaces also have very high levels of violence against women.

Since 2012 Project Empower has been running an intervention called Stepping Stones and Creating Futures with young women and men who live in urban informal settlements in eThekwini Municipality, South Africa. Stepping Stones and Creating Futures works with young people around two key drivers of violence against women – gender inequalities and poverty – to support young people to work to change their lives. Through a series of 21 structured sessions, young people discuss the issues they face in everyday life and start to work to change them.

The approach to Stepping Stones and Creating Futures is radically different to many interventions. “Often interventions want to teach people how to use condoms, or understand that there are laws to prevent violence against women” said Mpume Mbatha, who has been involved in this intervention since 2012, “but we know lack of knowledge is not the cause of HIV and violence. People know these things. Stepping Stones and Creating Futures says let’s get young people reflecting on why things are the way they are and talking to each other to identify their own solutions.”

This radically different approach has shown promise. A pilot evaluation of the intervention conduct in 2012 and 2013 showed positive results. In total 232 young women and men participated in the pilot, the evaluation found that women and men after one year reported earning more in the past year, feeling better about their life circumstances, had more gender equitable attitudes and, for women, reported experiencing less violence from an intimate partner.

Nompu and her partner both joined Stepping Stones and Creating Futures. When they joined neither of them had a job and survived doing occasional work and support from her boyfriend’s sister. For Nompu the intervention encouraged her to set small, realistic goals for herself to achieve:

Interviewer: When you were there you had to set goals for yourselves. Can you tell me which ones you set and whether you are fulfilling them or not?

Nompu: My short-term goals were to invest money and I have done that. I took R100 and went to Standard Bank and they have an investment programme. I invested and then I am looking for a job.

One year after joining the intervention Nompu had managed to secure herself a job at a restaurant. She was using this money to fund her education so she could complete her school leaving certificate and also continued saving money at the bank and in a savings group. Nompu also described her relationship with her partner as improving:

Nompu: My relationship is much better now.

Nompu: We no longer fight…. many things changed. I think the cause of that was that we were both stressed as we were unemployed and we were always together.

Now, with funding through the What Works to Prevent Violence Against Women and Girls Global Programme, which is funded by the UK Department for International Development (DfID), they are able to evaluate it, in collaboration with the South African Medical Research Council and the Health Economics and HIV/AIDS Research Division (HEARD) at the University of KwaZulu-Natal.

Women also reported experiencing high levels of violence. About 65% of the women reported either physical and/or sexual violence from a partner in the past year, population based estimates in South Africa are about 13% - suggesting the rates of violence are between 4 and 5 times more in informal settlements.

Despite the challenging contexts Project Empower’s facilitators are beginning to report successes in the latest evaluation. Reflecting on her experiences of delivering the intervention with young women Project Empower facilitator Nomfundo Chili commented “Working with young women around gender equality means little when they are hungry and reliant on men for survival – how can a woman leave her partner when she relies on him economically? That’s why Stepping Stones and Creating Futures works on both transforming gender inequalities and how they can improve livelihoods. And we’re starting to see change.”

The final results of the study will only be known in 2018, but the stories being reported to facilitators are promising. The evaluation alongside showing whether Stepping Stones and Creating Futures is successful in reducing violence against women and strengthening livelihoods, but will also be able to understand how women and men use interventions to make change in their lives.

Bhorat, H. (2015) Is South Africa the most unequal society in the world? Mail and Guardian, http://mg.co.za/article/2015-09-30-is-south-africa-the-most-unequal-society-in-the-world

More in this category: « Home isn’t the only place women are abused 'Be more sensitive to the plight of the victims of gender based violence' »
back to top