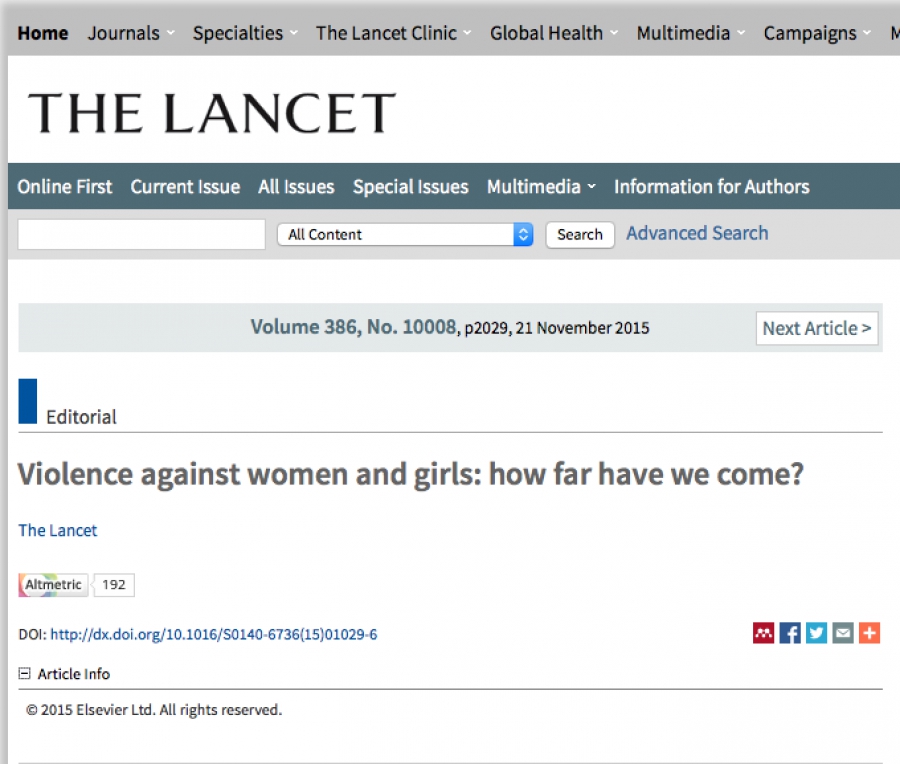 The Lancet - Violence against women and girls: how far have we come?

A year ago, The Lancet published a Series on violence against women and girls ahead of the International Day for the Elimination of Violence against Women on Nov 25. The day marks the start of the 16 Days of Activism against Gender-Based Violence, which this year, for the first time, has prevention as its theme. This focus is encouraging. One in three women will experience physical and/or sexual violence in their lifetime but, as evidence in the Series showed, such violence is preventable. The authors found that community and group interventions involving men and women can shift entrenched social norms and attitudes to reduce the risk of violence against women and girls, but concerted efforts were needed for change. The 16 Days of Activism campaign is an important opportunity for advocacy to connect with science by championing the evidence on prevention and the need to develop it further.

Globally, in the past year, the inclusion of a goal on gender equality in the Sustainable Development Goals has been the biggest advance. The goal includes targets to eliminate all forms of violence against women and girls, including trafficking, and to eliminate all harmful practices such as early or forced marriage and female genital mutilation. These are positive developments but leadership and coordination across UN agencies and by governments to drive progress has yet to emerge. Without these actions, the targets will not be realised.

More in this category: « 16 Days of Activism to End Gender-Based Violence – What Next Social Development Direct - Eliminating Violence Against Women International Day »
back to top