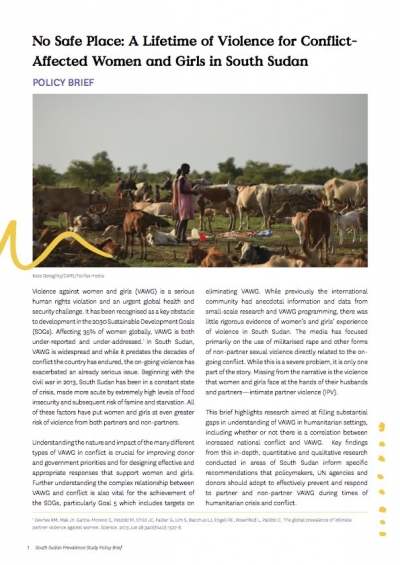 No Safe Place: A Lifetime of Violence for Conflict- Affected Women and Girls in South Sudan

Violence against women and girls (VAWG) is a serious human rights violation and an urgent global health and security challenge. It has been recognised as a key obstacle to development in the 2030 Sustainable Development Goals (SDGs). A ecting 35% of women globally, VAWG is both under-reported and under-addressed.1 In South Sudan, VAWG is widespread and while it predates the decades of con ict the country has endured, the on-going violence has exacerbated an already serious issue. Beginning with the civil war in 2013, South Sudan has been in a constant state of crisis, made more acute by extremely high levels of food insecurity and subsequent risk of famine and starvation. All of these factors have put women and girls at even greater risk of violence from both partners and non-partners. 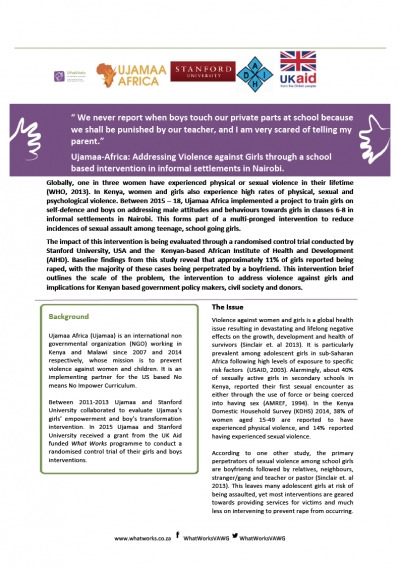 “ We never report when boys touch our private parts at school because we shall be punished by our teacher, and I am very scared of telling my parent.”
Ujamaa-­‐Africa: Addressing Violence against Girls through a school based intervention in informal settlements in Nairobi. 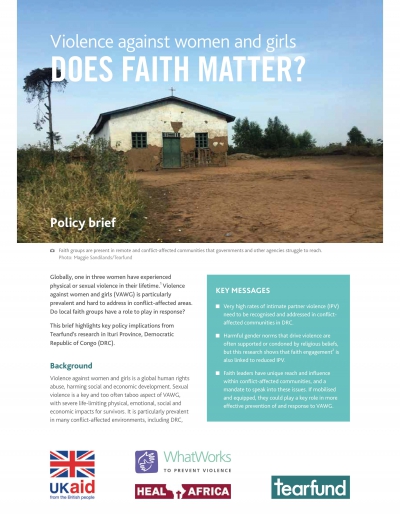 Violence Against Women and Girls- Does Faith Matter?

Sexual violence is prevalent in many conflict-affected environments, including the Democratic Republic of Congo, where it is reported that 1.8 million women have been raped in their lifetime. According to the Special Representative of the UN Secretary-General on Sexual Violence in Conflict, conflict-related sexual violence is one of the most critical challenges faced by the people and government of the DRC.

Under the £25 million What Works to Prevent Violence Against Women and Girls programme, Tearfund was funded by the UK Government to implement a project – ‘Engaging with Faith Groups to Prevent Violence Against Women and Girls in Conflict-affected Communities’. This policy paper, drawing on research conducted by Tearfund, reveals that faith leaders indeed have unique reach and influence within conflict-affected communities and a mandate to speak into these issues. If mobilised and equipped, they could play a key role in more effective prevention of and response to VAWG. 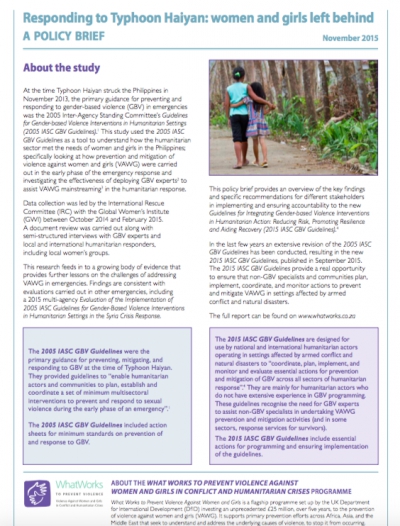 At the time Typhoon Haiyan struck the Philippines in November 2013, the primary guidance for preventing and responding to gender-based violence (GBV) in emergencies was the 2005 Inter-Agency Standing Committee's Guidelines for Gender-based Violence Interventions in Humanitarian Settings. This study used the 2005 IASC GBV Guidelines as a tool to understand how the humanitarian sector met the needs of women and girls in the Phlippines; specifically looking at how prevention and mitigation of violence against women and girls (VAWG) were carried our in the early phase of the emergency response and investigating the effectiveness of deploying GBV experts to assist VAWG mainstreaming in the humanitarian response. 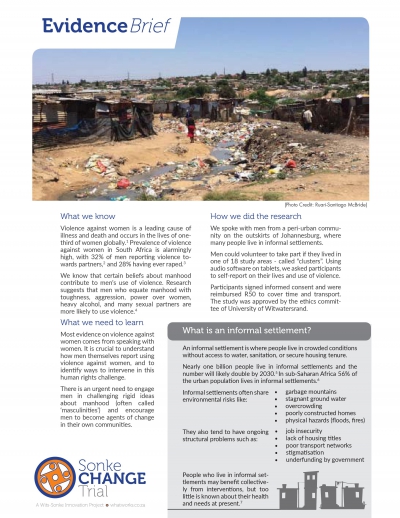 Most evidence on violence against women comes from speaking with women. It is crucial to understand how men themselves report using violence against women, and to identify ways to intervene in this human rights challenge. There is an urgent need to engage men in challenging rigid ideas about manhood and encourage men to become agents of change in their own communities. Researchers studied feedback from men from a peri-urban community on the outskirts of Johannesburg, where many people live in informal settlements. Men taking part were between 18 to 40 years old, with the average participant aged 27. This brief outlines the findings.