Is Right to Play effective in reducing peer victimisation in Pakistan and also in improving attitudes towards gender roles, and improving youth mental health and school performance? This informative brief includes methodology, findings regarding the relationship between disability and violence, and also the intersection of corporal punishment by teachers and peer violence, and makes policy recommendations. 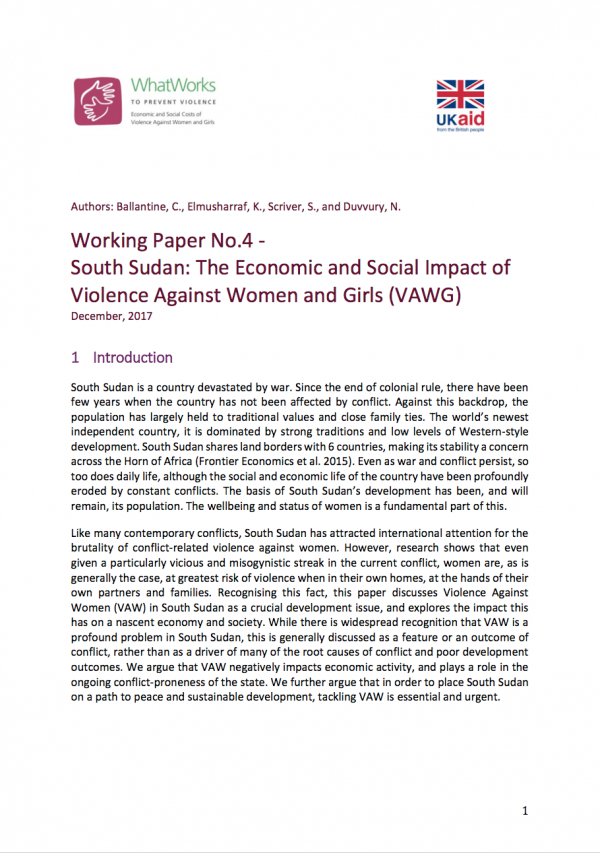 Working Paper No.4 - South Sudan: The Economic and Social Impact of Violence Against Women and Girls (VAWG)

South Sudan is a country devastated by war. Since the end of colonial rule, there have been few years when the country has not been affected by conflict. Against this backdrop, the population has largely held to traditional values and close family ties. The world’s newest independent country, it is dominated by strong traditions and low levels of Western-style development. South Sudan shares land borders with 6 countries, making its stability a concern across the Horn of Africa (Frontier Economics et al. 2015). Even as war and conflict persist, so too does daily life, although the social and economic life of the country have been profoundly eroded by constant conflicts. The basis of South Sudan’s development has been, and will remain, its population. The wellbeing and status of women is a fundamental part of this.

What do we mean by social norms?

Violence against women and girls (VAWG) is a pervasive social problem across the globe, but varies in prevalence and severity. The 2013 mapping of the Global Burden of Disease showed the prevalence of physical and sexual VAWG differed between countries, and between ethnic groups and social classes within countries. Two central, and overlapping, sets of ideas and practices driving VAWG are those related to gender relations and those on the use of violence.

Shifting Perceptions of Consequences of IPV Among Beneficiaries of Indashyikirwa: An IPV Prevention Program in Rwanda

What are the Drivers of Violence Against Women and Girls and What Works to Prevent it?

This presentation, given by Professor Rachel Jewkes, Executive Scientist in the office of the President, South African Medical Research Council and Consortium Director, What Works Global Programme, examines different types of IPV, and assesses the relative importance of key driving factors, including poverty, food insecurity, social norms regarding both gender and the use of violence, and disability. The presentation outlines tasks to combat IPV and illustrates the beneficial effects of economic empowerment and gender empowerment, and of changing social norms.

This presentation, given by Henri Myrttinen, International Alert, looks at the ongoing work of a three-year project taking place in four villages in two districts of Tajikistan, featuring 271 beneficiaries. The ethnic Tajik and Uzbek villages are all affected by circular out-migration. Findings indicate among the highest levels of VAWG in the What Works consortium, caused in part by male labour migration (Russia, less to Kazakhstan), structural food insecurity (esp. women), low income levels, very high levels of economic precarity and living on debt, and substance abuse.

This presentation is an assessment of the approach, tools, challenges and successes of the Change intervention by Equal Access in Nepal. Changes noticed included increased communication between couples, joint decision-making, sharing of household chores, and participants learning to speak out against IPV and VAWG.

VAWG in Conflict and Humanitarian settings: Does Faith Matter? Findings from the DRC

A household survey taken in Ituri, DRC, reveals shocking levels of IPV and sexual violence. This presentation looks at the benefits of engaging with faith groups to prevent violence in conflict-affected communities. It assesses the reach and influence of faith groups and leaders, and how they have the capacity to change gender attitude. This is facilitated by training faith leaders and gender champions, and a programme of community dialogues.