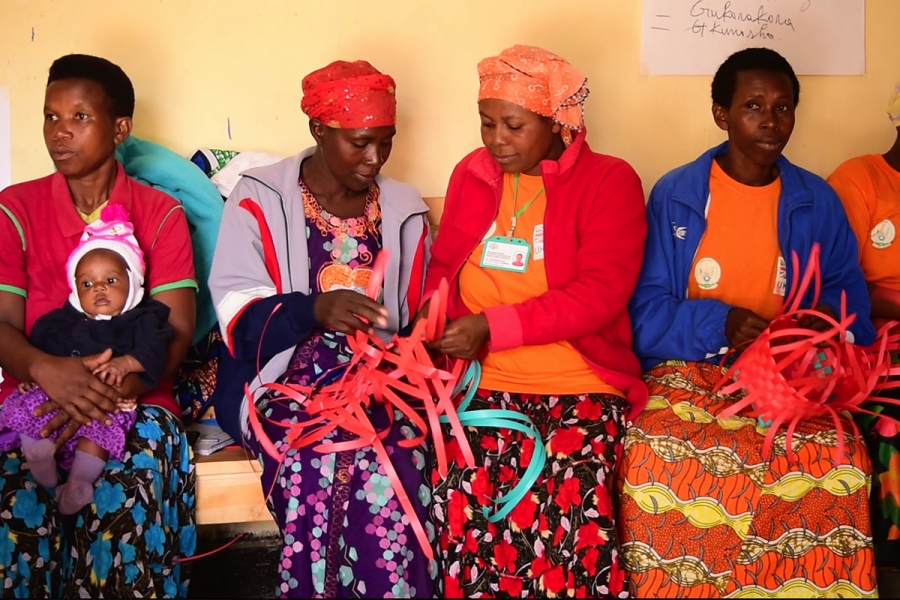 I felt I had power within myself that allowed me to do something with my fellow women..

Eugenia is a 35-year-old woman from a rural village in the Eastern Province of Rwanda. She is married and has a son and a daughter and they live off produce from their land. There are limited employment opportunities in her village, especially for women. Although there have been significant efforts to economically support women in Rwanda, including through micro-finance programmes, CARE Rwanda’s assessment of their village savings and loans associations (VSLA) found that many women were not fully benefiting from this programme. In many cases, men were controlling the function of the village savings and loans groups and money, and many women did not feel confident to make decisions about a loan without their husband’s approval. Eugenia’s own story is no different and has suffered similarly controlling behaviours from her husband including not being able to access or make decisions about household resources, and being dissuaded from leaving their house.

Indashyikirwa, a DFID-funded programme coordinated by CARE Rwanda, implemented by Rwanda Men’s Resource Center (RWAMREC) and Rwanda Women’s Network (RWN), has been set up to address these types of controlling behaviours among couples and prevent violence. A critical aspect of the programme is 14 safe spaces for women, which were established across all of the intervention sectors in Eastern, Northern and Western Provinces of Rwanda. The spaces are staffed by women elected from their communities, who have been trained and supported by RWN staff to help women feel comfortable discussing intimate partner violence (IPV) and gender inequality, they help educate women about their rights, refer or accompany women for health, social or criminal justice services. The women’s safe space facilitators also advocate on women’s rights, IPV prevention, and improved services for survivors of IPV in their communities.

Eugenia first heard about the Indashyikirwa women’s safe space at a community meeting, but was worried her husband would not allow her to participate. When women’s safe space facilitators came to her home to discuss the value of the spaces, her husband supported her joining. Eugenia shared her story in June 2017, at which point she had been attending the women’s safe space for almost one year, on a weekly basis. Learning about having ‘power within’ strongly resonated with Eugenia, and motivated her ongoing attendance:

“They explained to me that each person has power and can do something using his or her power. I didn’t know I had power because I had been confined at home doing housework. For example, I knew how to make a basket but I didn’t know I could weave it and sell it. I thought that I could just weave a basket and keep it at home, but after joining others I wove it; I felt I had power within myself that allowed me to do something with my fellow women.”

Eugenia also appreciated learning about her rights according to Rwandan laws and policies that she was previously unaware of, such as to household property. Eugenia’s regular participation at the women’s safe space supported her economic development, and also gave her the unique opportunity to openly share, support and work with other women:

“Because I was confined at home, I was affected by solitude, but when I arrived at the women’s space, they were able to teach me and I got out of my loneliness. When I wove baskets with others, I started to sell the baskets and therefore I was able to pay for my community health insurance, whereas I couldn’t pay for it before. Because when we harvested crops, my husband sold the harvest and when I told him that we needed to pay for health insurance, not all the needed money was available.”

Eugenia suggested that the women’s safe space facilitators offer a valuable community resource, who can be called upon for help, and that many women prefer reporting IPV to them rather than police or local leaders for providing confidential support and quality time. Eugenia reflected on changed household dynamics as a result of her attendance at the women’s safe space. After learning the value of raising boys and girls with equal opportunities, she now encourages both her son and daughter to take responsibility for domestic duties, unlike before when these tasks would solely fall on her daughter. Eugenia regularly shares what she learns at the safe space with her husband, such as the value of making joint decisions, openly communicating, and both supporting domestic duties. She noted that her husband is increasingly supportive of these changes, and gave an example of him helping more with housework:

“He understands that when people team up and do housework they have peace because if you come home tired and you find they have prepared a meal for you, you feel relieved and tomorrow you go to work feeling that you are a human being and not a tool.”

Yet, Eugenia suggested that her relationship would likely change more significantly if her husband also attended the women’s safe space. The women’s safe spaces are open to men who can themselves seek support for IPV, and so that the spaces are transparent to all community members. Yet, observations of activities at some of the safe spaces found that that men often dominated discussions, or that some women felt less open when men were present. To address this, in a context with limited women led spaces, RWN established dedicated days where couples and men are invited to attend the women’s safe spaces.

Eugenia’s story is far from unique. A baseline community survey conducted as part of the evaluation of Indashyikirwa found that 89% of women who had heard of the safe spaces reported attending multiple times. There is increasing interest in Rwanda of opportunity centers to economically empower women. Yet, Eugenia’s story highlights the value of holistic, women led spaces, which prioritize their safety and well-being, in combination with economic empowerment. The impact of the women’s safe spaces and broader Indashyikirwa programme are being evaluated as part of the What Works to Prevent Violence against Women and Girls Programme, funded by UKAID.

1. Eugenia’s name has been changed for confidentiality purposes
2. Sectors are the third level administrative subdivision in Rwanda. The Provinces of Rwanda are subdivided into 30 districts, and each district is in turn divided into sectors, totaling 416 sectors

Tagged under
More in this category: « Firuzah’s story On becoming an entrepreneur »
back to top