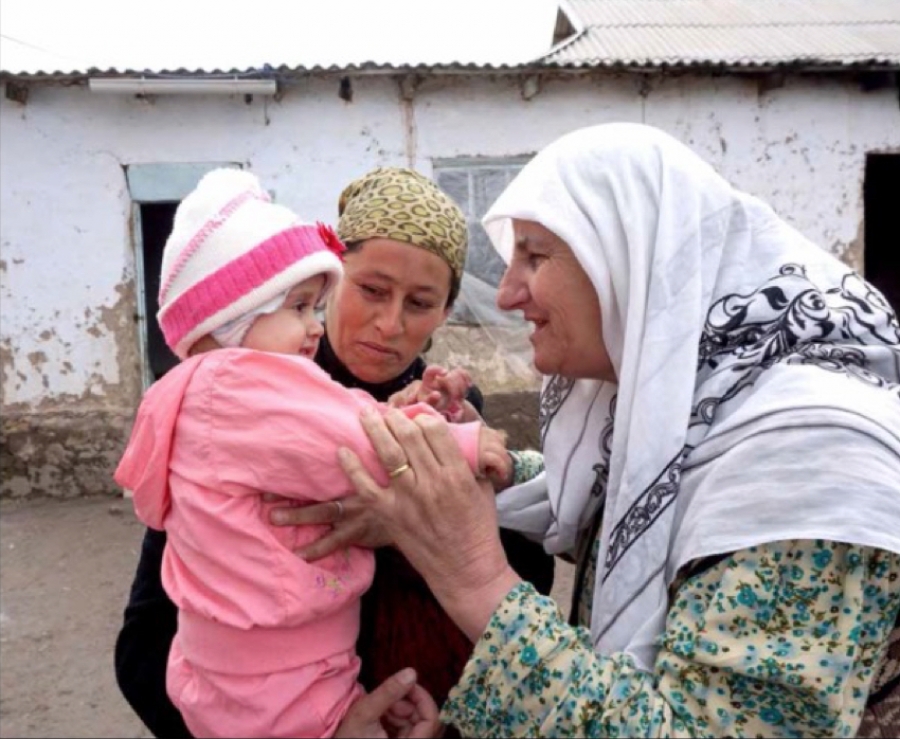 Gulina* is a young woman from Tajikistan. She was married at an early age to Zafar*, a labour migrant, and lives with her extended family, as is tradition in the region.

Her in-laws treated Gulina cruelly. Her mother-in-law managed all the household finances, controlling Gulina’s movements and access to money. As a wife, Gulina was expected to be an ‘ideal woman’ – submissive and obedient, never talking back. If she fell short of this ideal, she would be disciplined.

“I had to ask permission from my mother-in-law when I planned on going somewhere, including visiting my parents. Even if my husband gave his permission.”

It is estimated that one third to half of all women in Tajikistan live in similar circumstances and are regularly subjected to physical, psychological or domestic and sexual violence (Amnesty, 2010). Because of the tradition of wives living with their extended families, mistreatment by other members of the family is common, especially by mothers-in-law. Findings from the formative research phase of the Zindagii Shoista (Living with Dignity) project funded through the What Works to Prevent Violence against Women and Girls Global Programme, through UKAID, found high levels of sexual and gender-based violence and domestic violence, predominantly perpetrated by husbands as well as by mothers-in-law (Mastonshoeva et al., 2017).

“Women have a low status in Tajik society,” says Zindagii Shoista Project Manager, Shahribonu Shonasimova. “Practices such as early marriage, polygamy and weak protections for women in terms of divorce and property rights continue to undermine women’s rights, and that’s what we want to change.”

The emotional stress, poor living conditions, meagre diet and extra workload that Gulina was subjected to by her extended family led her to consider divorcing Zafar. Fortunately, Gulina, her husband and mother- in-law were invited to join our Zindagii Shoista: Living with Dignity workshops. This research intervention brings together wives, husbands, mothers- in-law and other family members with their peers to discuss and improve the role that wives and daughters play in the family. The groups then meet collectively to share their ideas and opinions as a community.

By improving gender relations in this way, we hope to reduce the levels of violence perpetrated against women and girls in Tajikistan, as sexual and domestic violence stem from the same place as the devaluation and discrimination of women.

Acknowledging the role that wider family dynamics and social norms play in maintaining this problem is crucial. In 2016, with our local partners we ran workshops in four villages in northwest Tajikistan with 81 families, totalling 270 people. Those attending, which included men and women both young and old, said the sessions improved their family relationships and the daily experiences of the women who attended.

In one particular village, 15 of the 20 families we supported say their family relationships have improved since the workshops, especially between husbands and wives, and wives and mothers-in-law.

“At the beginning, I was always late for the session,” recalls Gulina, “because I knew that if I did not finish my work at home, it may lead to a new conflict. Or I did not have anyone who could look after my children. I was hesitating to ask my mother-in-law or my brother-in-law’s wife to look after them, knowing their reaction in the past.”

However, after a few sessions, Gulina saw a change in her mother-in-law, who started offering to look after the children so that Gulina could attend her sessions.

Gulina now plans to purchase a cow and start a small business. When she shared her idea with her family, Zafar was happy with the idea and her mother-in-law offered to help take care of the children, even suggesting a space where Gulina could keep the cow. Gulina and Zafar have now finished preparing the cowshed and are visiting animal markets once a week to find a good milking cow to buy.

Tagged under
More in this category: « Amanda finds her voice How Momin* was helped to change his ways »
back to top