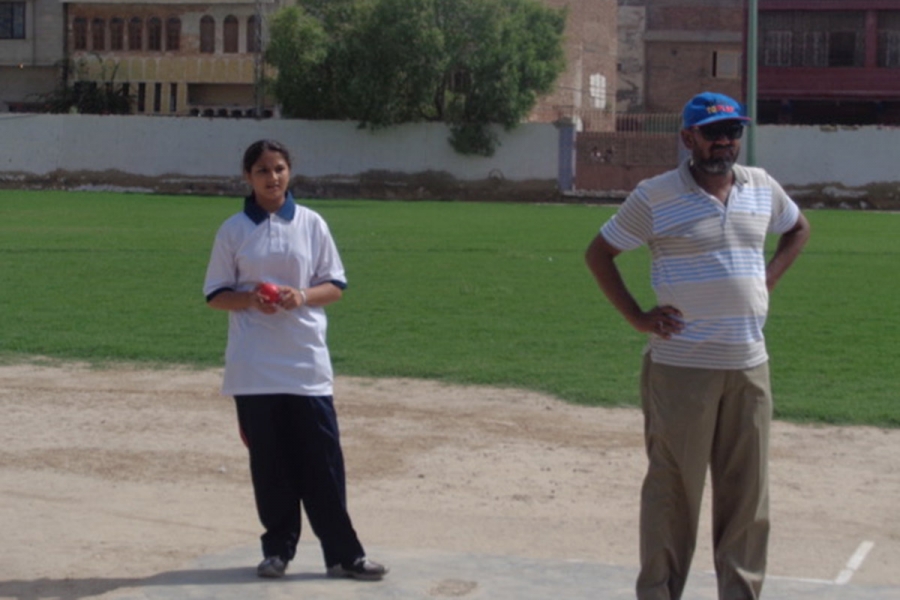 A promise to herself: Hira’s story of self-determination, playing cricket and fulfilling dreams

A bright prospect for district Hyderabad’s under 17 girls cricket team, 14-year-old Hira, who goes to a girls’ secondary school in Pakistan, is an exceptional player despite her extremely poor background, and lacking basic resources.

Hira’s parents are illiterate; her father works as a mechanic in a workshop and so spending even the minimum on education was a luxury.

Speaking with sparkling eyes, and with hope and confidence in her voice, Hira said that she was an average student in class, that she had low self-confidence and always sat at the back. “When going to school was a luxury, being able to engage in sport was an impossible dream,” she said, “even though I have wanted to play since I was a child”. Living in a small house in extended family system, watching cricket on TV was the only option she could afford. With the help of Coach Nazia, however, and through games and life-skills education, her whole attitude has undergone a subtle change and her confidence in school and at home has improved.

In August 2016, her schools-based project, Right to Play organised a summer camp for cricket coaching. Right to Play is a schools-based evidence informed programme that seeks to build positive attitudes and support for gender equality amongst young people. For girls like Hira it was a dream come true to be able to play her favourite game. Through this event, Hira was offered opportunities to play cricket and to be coached in the techniques. “It was thrilling to hold a bat and to bowl for the first time ever in my life”, Hira said. Through the summer camp, the Pakistan Cricket Board (PCB) women’s wing selected Hira for the under-17 girls’ team for district Hyderabad.

Later, she was offered opportunities for further training by the PCB and also to represent district Hyderabad in the national level girls under 17 10-day tournament in Lahore. As Hira’s mother shared with us “Hira’s father works on daily wages. It was hard for us to pay half of one day’s wage even for a rickshaw fare, but the whole family sacrificed the money needed to send Hira to Lahore, and we all went to see her off on the journey to her dreams”. Hira did her family proud: her team was runner up in the tournament in Lahore.

Hira has become an example for her elder sister and younger siblings and cousins in the family. She is an also inspiration for other girls in her school. Hira herself told us with a great pride and confidence, “in a few years you will see me in cricket matches on TV, playing for the national women’s team”. She is working hard to improve her skills with the cricket ball, and her ambition is to become a top-class spin bowler and to be selected to play for Pakistan in the national women’s team.

Tagged under
More in this category: « Nazia learns to manage her emotions Tales of transformation »
back to top