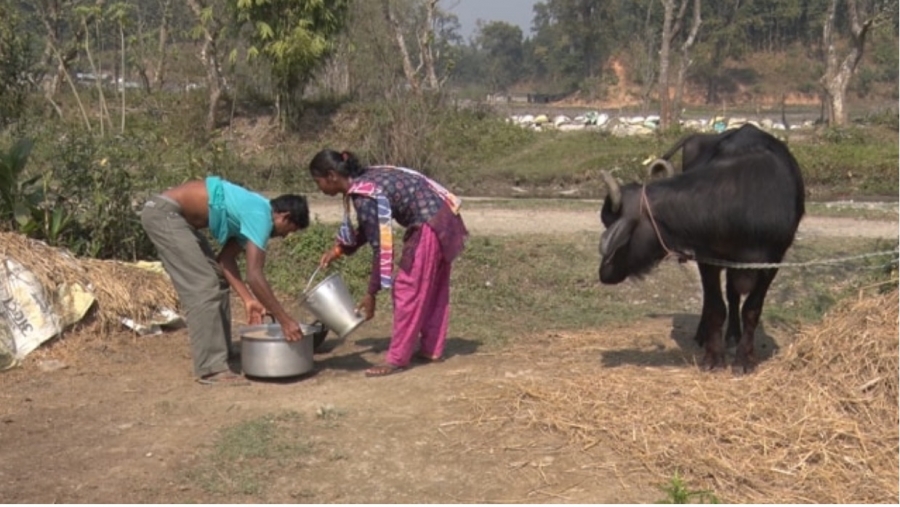 Ending Intimate Partner Violence One Couple at a Time

“In the past my husband used to abuse me. He didn’t count me or our daughters as human beings… he used to force me into having sex.” That is how Bikani, a Nepali woman, with two daughters, initially summarized her ten-year marriage. The experience of Ashram and Bikani is not uncommon in Nepal. A recent study carried out by Equal Access International (hyperlink) and Emory University found that 34% of survey respondents had experienced intimate partner violence in their lifetime and 25% had experienced physical or sexual abuse from their spouse in the past 12 months.

Today, things could not be more different for Bikani and her husband Ashram, thanks to Change Starts at Home.

“The programme had a very influential impact in our life. Earlier he did not talk to me about any of his plans… now we talk to each other about most of the things we do. Even our sexual relationship only happens after mutual consent,” said Bikani.

Her husband, Ashram, said, “from the sessions we learned how to analyze the consequences of our behaviour and how it will impact us. Now, even when I get angry, I remember the things that were discussed in the sessions and try to tame my temper.”

Change is a programme designed by Equal Access International, an NGO that creates positive social change for millions of people across the developing world that has been working in Nepal since 2003, and funded by DFID as part of the ‘What Works to Prevent Violence Against Women’ global programme.

Change enlisted 360 married couples, including Bikani and Ashram, to participate in nine months of weekly listening and discussion groups sessions (LDG) where they would listen to an original radio drama about couples dealing with real-life problems. The accompanying discussion sessions, guided by trained facilitators using the Change curriculum, allowed participants to express themselves, both to peers of the same sex and their spouses, whilst taking part in activities focused on the major theme of that week’s episode. For many, this has been the first time that they communicate openly with their partners and, most importantly, communicate as equals, a simple yet powerful change.

By the end of the project, over 90% of LDG members reported a positive change in themselves or their relationship and almost 90% noticed a change in their spouse. Overall, Change recipients report an increase in joint-decision making with husbands including their wives in financial planning; husbands openly supporting their wives with household chores and childcare, and engaging in consensual sex.

Both Bikani and Ashram are keen not to return to the way things were. With their daughters doing better at school now, the couple is looking forward to a more positive future. Ashram is grateful to his wife for initiating a change and hopes they can inspire the same in others.

“I know if it weren’t for my wife, then my home would have been destroyed. My wife endured everything in the hope that I would change and now we have a good relationship and good relationships with our relatives. I even tell my friends and neighbors about the good things I have learned from the radio program and the weekly sessions,” said Ashram.

Change is a successful example of how innovative research and programming can be used to address and end intimate partner violence. Its key findings were shared by Equal Access’ Lead Researcher Binita Shrestha at the fifth SVRI Forum in Brazil in partnership with What Works.

Tagged under
More in this category: « How Momin* was helped to change his ways Alisher’s Story »
back to top